Adventuring on a Raft - or Bored to Tears? 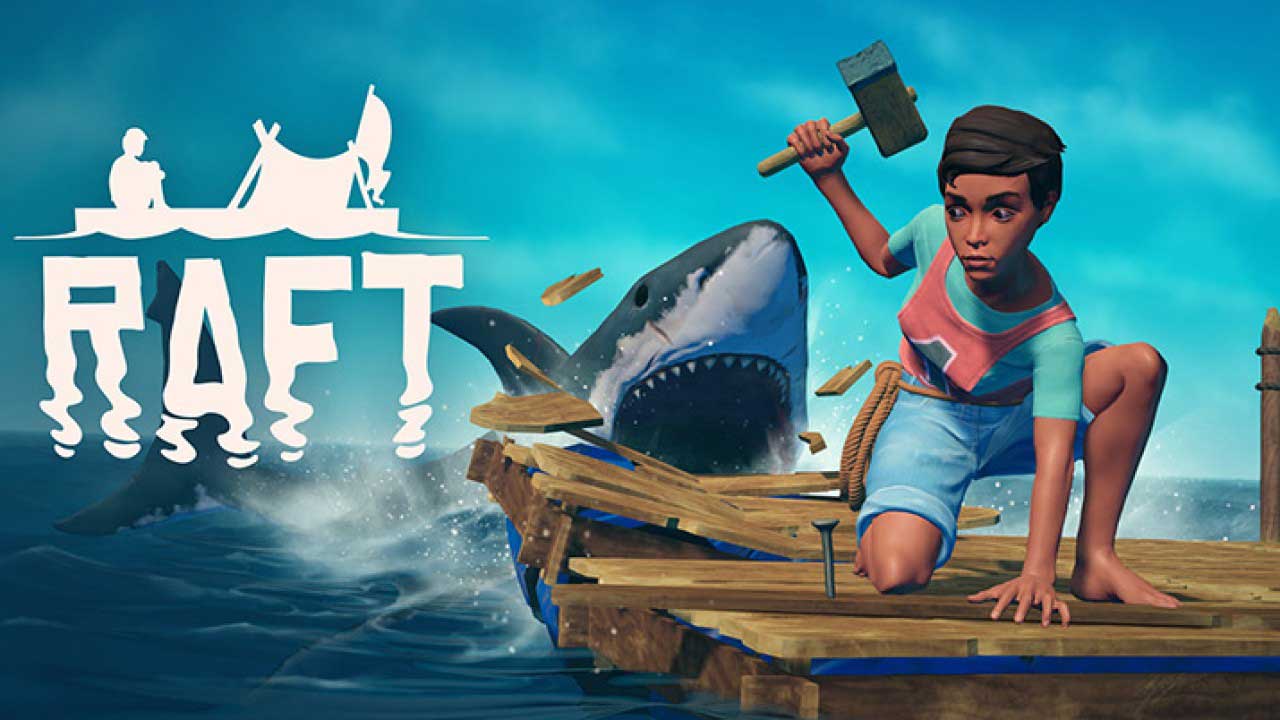 "This is stripped to a single raft, endlessly bobbing through the sea," says one player about the game. While one might expect this statement to be a set up for a bad review, it's actually the exact opposite. "And I've loved it!" finishes the Raft game fan. Raft begins by placing a single player and his or her friends (if multiplayer) at sea on a small plank of wood with nothing but a single hook made of plastic.

When players come to, all they see is an endless ocean, a frightening and daunting situation even for those with the sturdiest of sea legs. Avatars are parched and in dire need of sustenance. Players' objectives? To help their avatars survive.

Players Encouraged To Use Society's Flaw to Their Advantage

Littering is a detriment to the environment as a whole, but it's safe to say that no other terrain suffers so much from humans' carelessness as the ocean. Raft creators who, at the time of creation, were three university students thrown together to work on a class project decided to use this fact to their advantage by placing a faceless character at sea with nothing but a piece of driftwood and a hook-shaped piece of garbage. 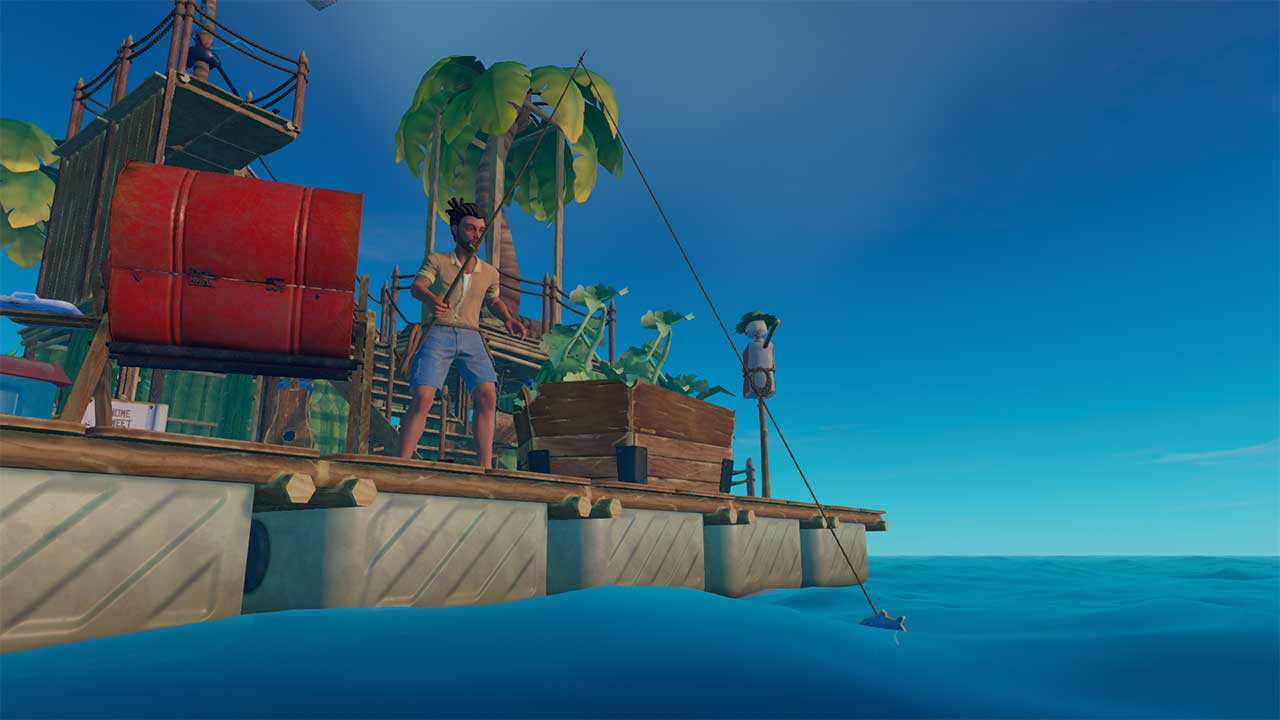 The goal? For drifters to catch whatever debris floats by and use it to build themselves a floating home worthy of survival. In this video game, it seems that to come across the Great Pacific Garbage Patch would be a lucky happenstance. Initially, floating patches of garbage contain simple objects avatars can use to create tools, which they can then use to capture food and water.

However, over time, as gamers grow stronger, the emphasis becomes less on satiating hunger and thirst and more on creating a self-sustaining environment at sea. It is then that players begin to notice more complex pieces of garbage coming their way. 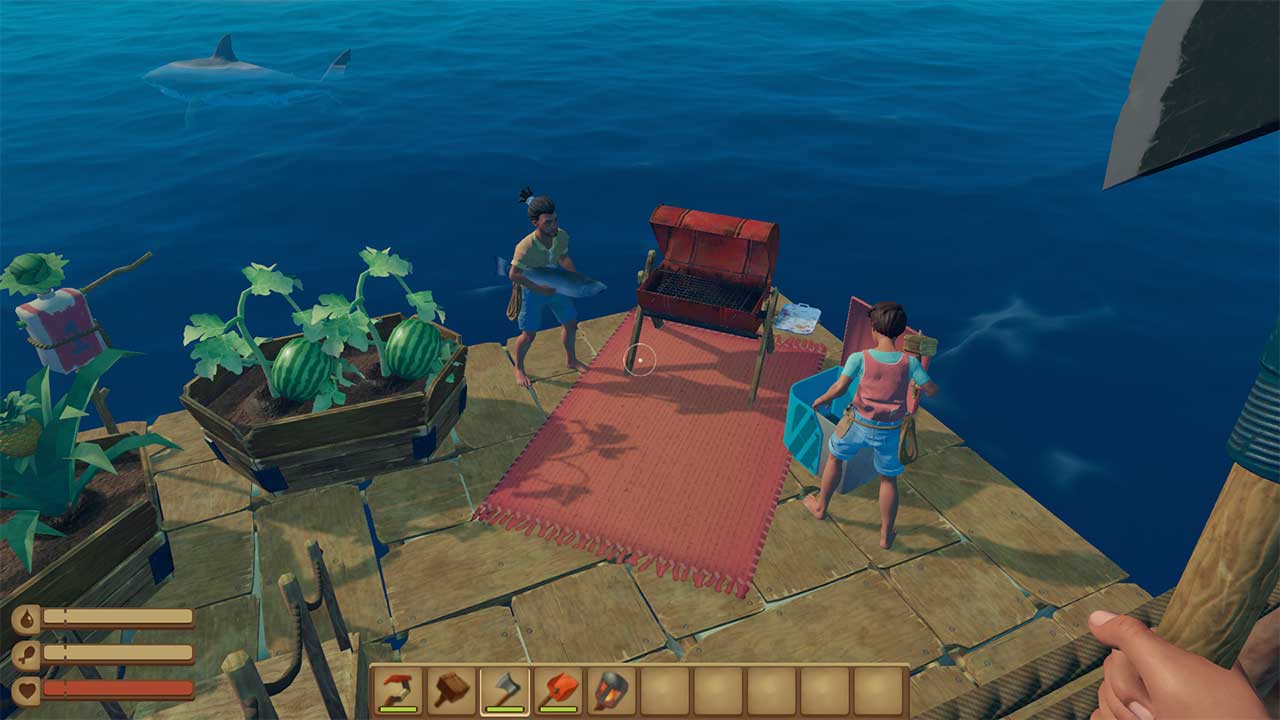 Players are also encouraged to dive beneath the surface and scavenge trash-laden reefs for useful resources. If they happen to find tasty-looking sea life down in the depths, even better.

Hunting and Gathering Are Not Players Only Concerns

For players whose idea of fun does not involve floating on an endless horizon and digging for trash, the game offers a bit more excitement beneath the surface. While the raft floats, a man-eating shark circles below. 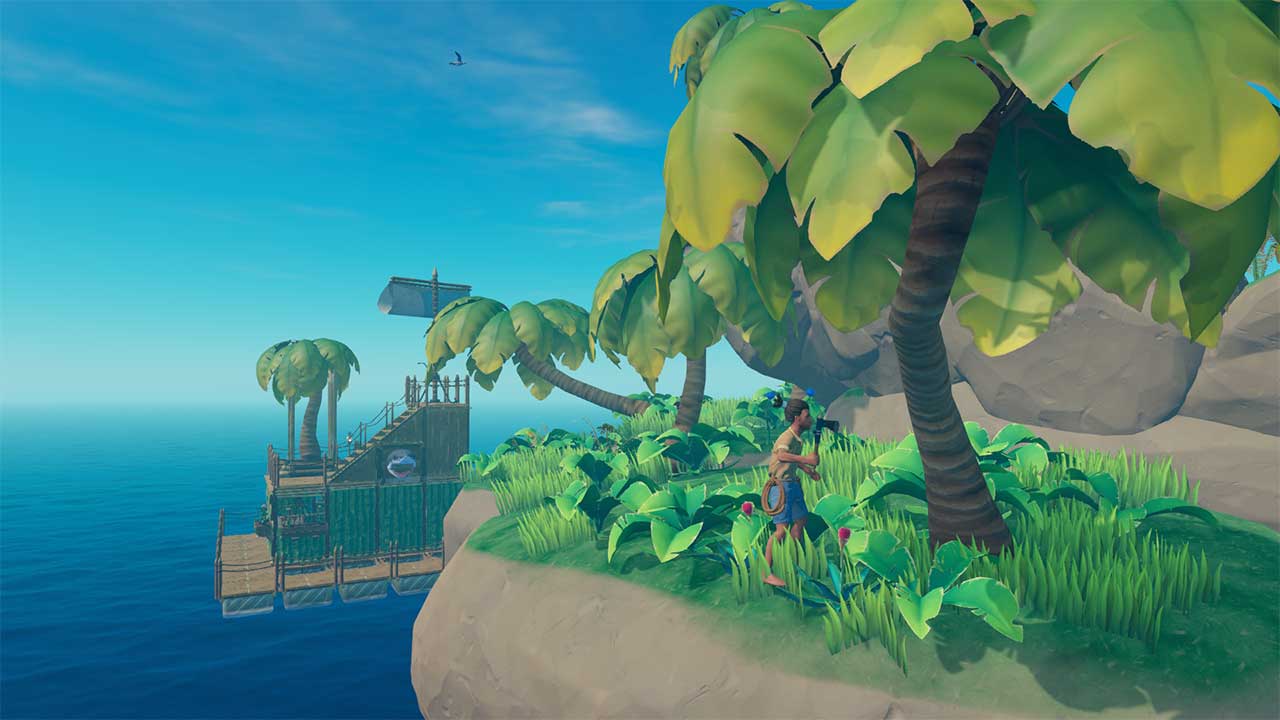 If players aren't vigilant, the shark can take a bite out of the hard-worked-for additions to the unanchored shelter. Occasionally, the shark will try to get a taste of any player who tries to swim a few yards to capture a piece of, particularly appealing debris or who wants to snag a bite to eat from the teaming reef below.

For some players, trying to survive in shark-infested waters is too stressful to do on a consistent basis. Yet, these players find solace in building extensive shelters from random odds and ends they happen to encounter in their drifting. The compromise? A creative mode.

In the early days of the game, Raft creators implemented a creative mode that simply allows competitors to build magnificent seafaring structures using their wits and debris. 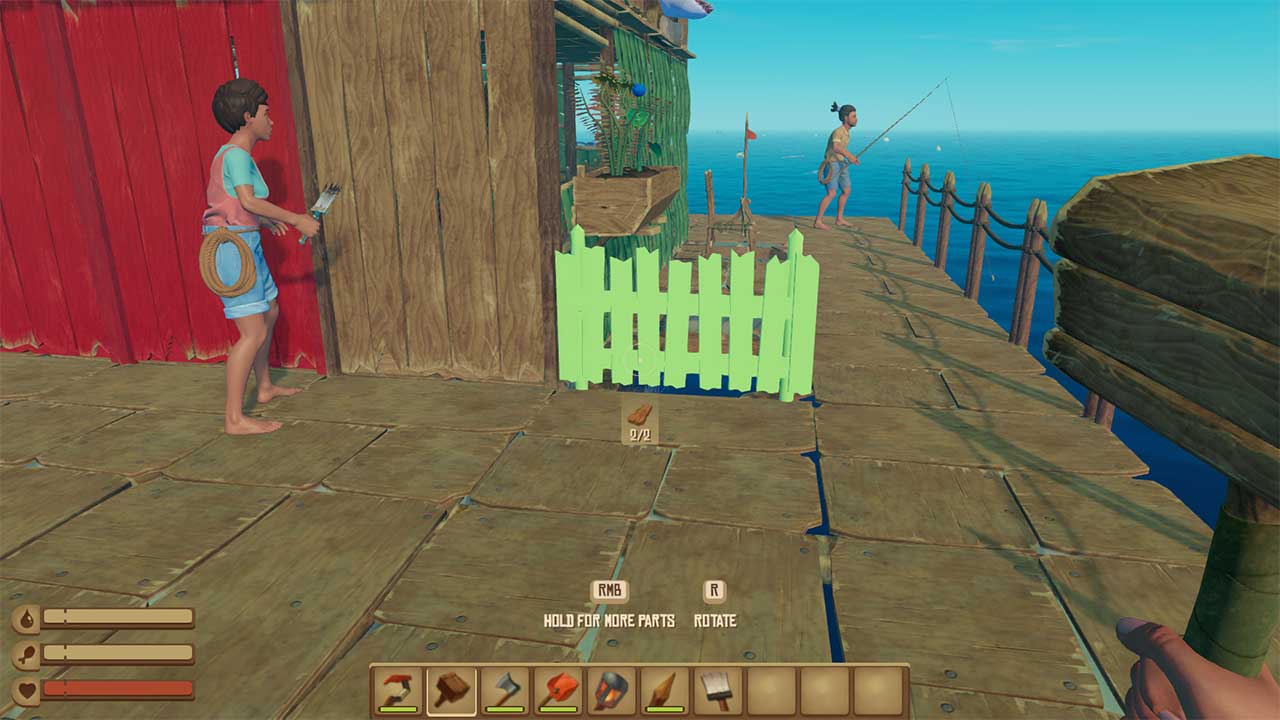 Debris may include palm fronds, wood, plastic, rope, and metal. With these pieces of scrap, more ingenious Raft players develop tools and building materials they then use to create what are essentially houseboats, replete with beds, raised gardens, tables, porches, propellers, grills and other staples you might find at a land-based abode.

Large Islands and Abandoned Vessels Provide an Abundance of Resources

If players can get beyond the fact that they're drifting for no other apparent reason than to survive, they'll eventually spot something that looks a lot like land or a wrecked vessel. Are their eyes deceiving them? No, they're not. 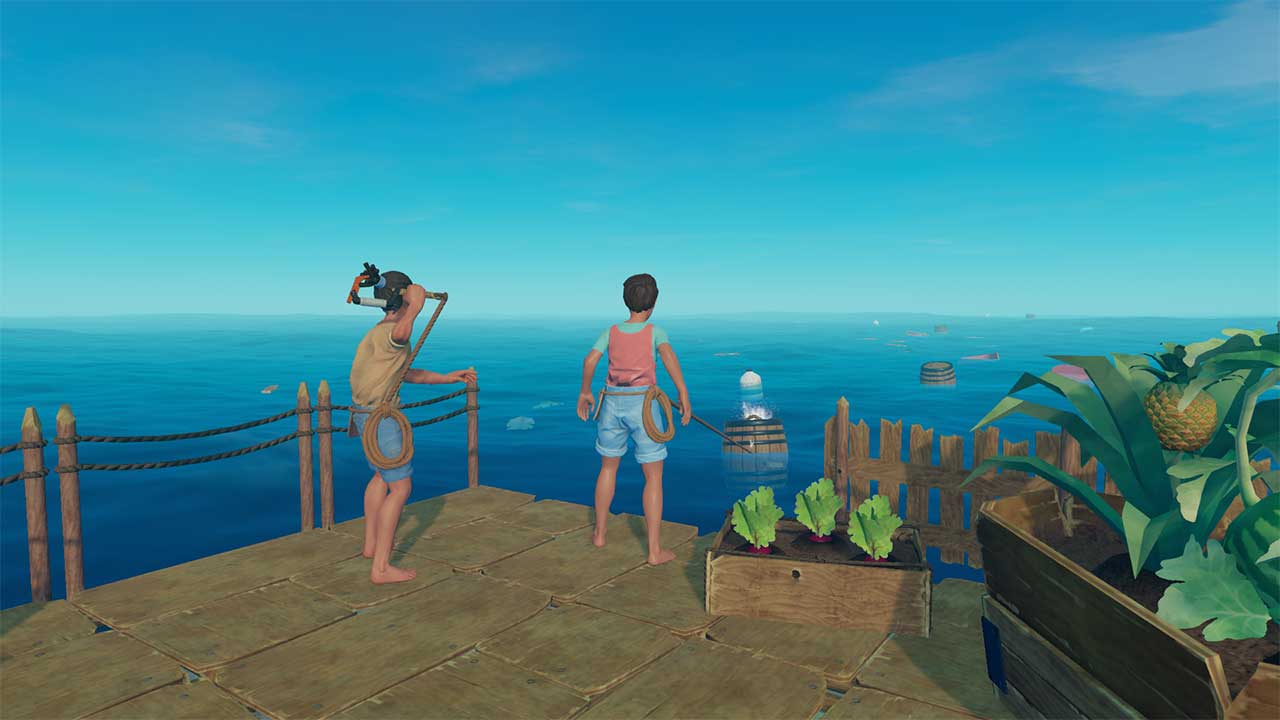 Updates to the game brought with them small islands and abandoned vessels, which, if they can get to them, avatars are free to explore and loot for whatever items they need. These updates are particularly notable, as many derelict ships contain metal and pieces of waterlogged tech equipment that avatars can dry out to create electronic equipment that actually works. Think sonar, GPS and receivers that allow players to navigate rather than aimlessly drift. 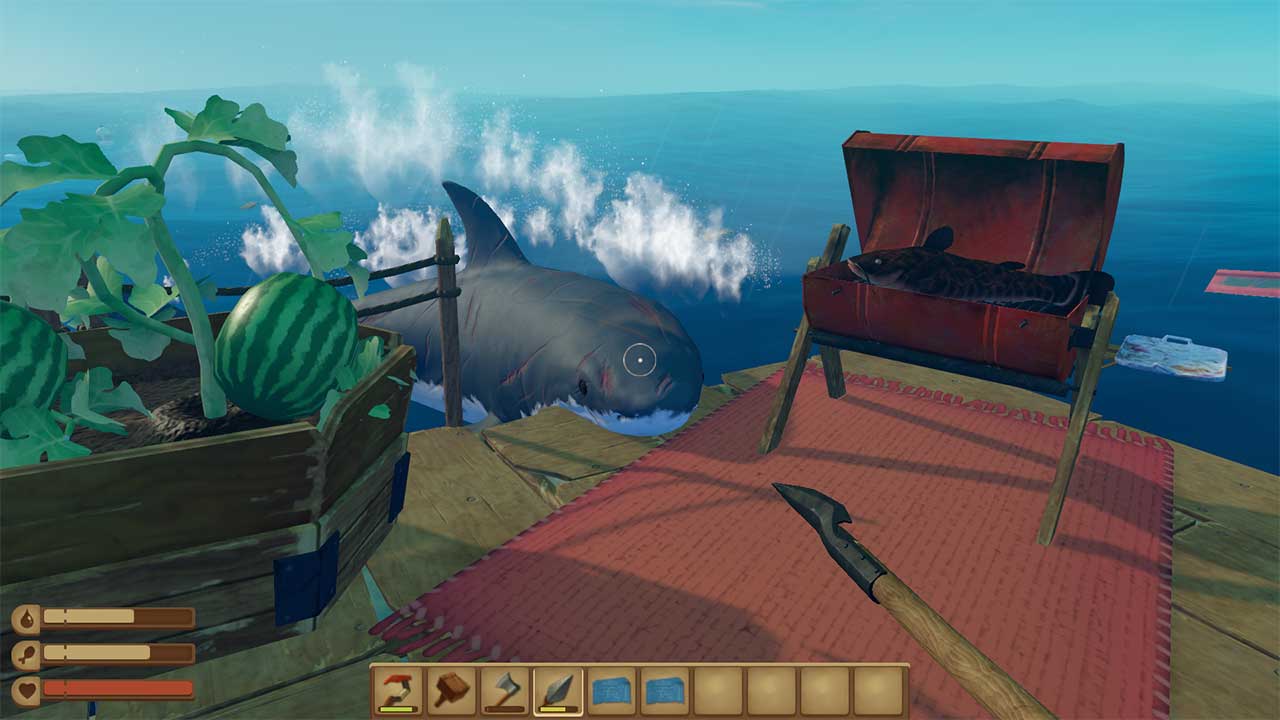 The Large Island Update, a newer update, plays a key role in the new advanced cooking system. This system allows players to sustain avatars' hunger for much longer by eating meals that consist of ingredients found both at land and sea. The system includes 11 new recipes, which players can locate in crates hidden at rare locations. 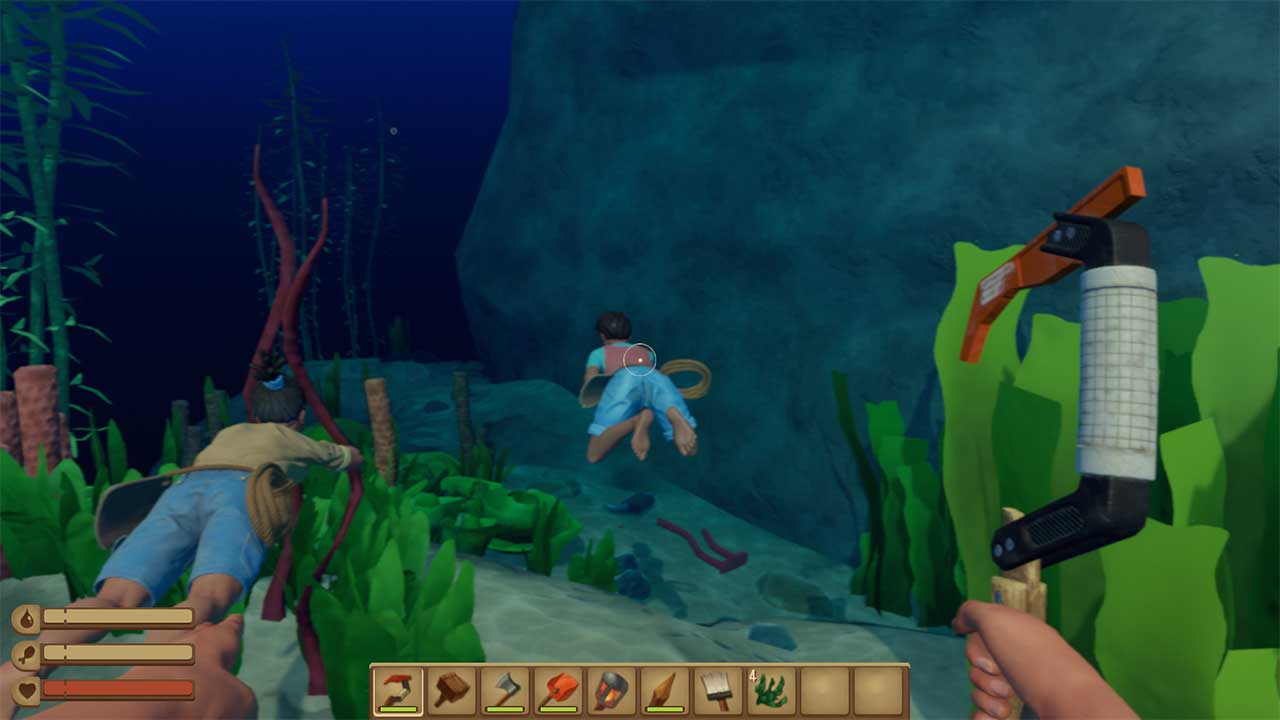 The large islands contain a plethora of resources that the smaller islands, reefs and garbage patches don't, such as berries, mushrooms, cooking pots, stoves and more. Because of this, the creators don't make it easy for avatars to access these lands.

Before they can ground their vessels, players must battle the Screecher, a phoenix-like bird that can be found circling and protecting the new large islands. If the Screecher spots an avatar, it will attack onsite and bombard him or her with rocks. Players can defeat the Screecher by shooting it down with a bow and arrow (which, hopefully, the shark didn't nab) or during a spear battle. 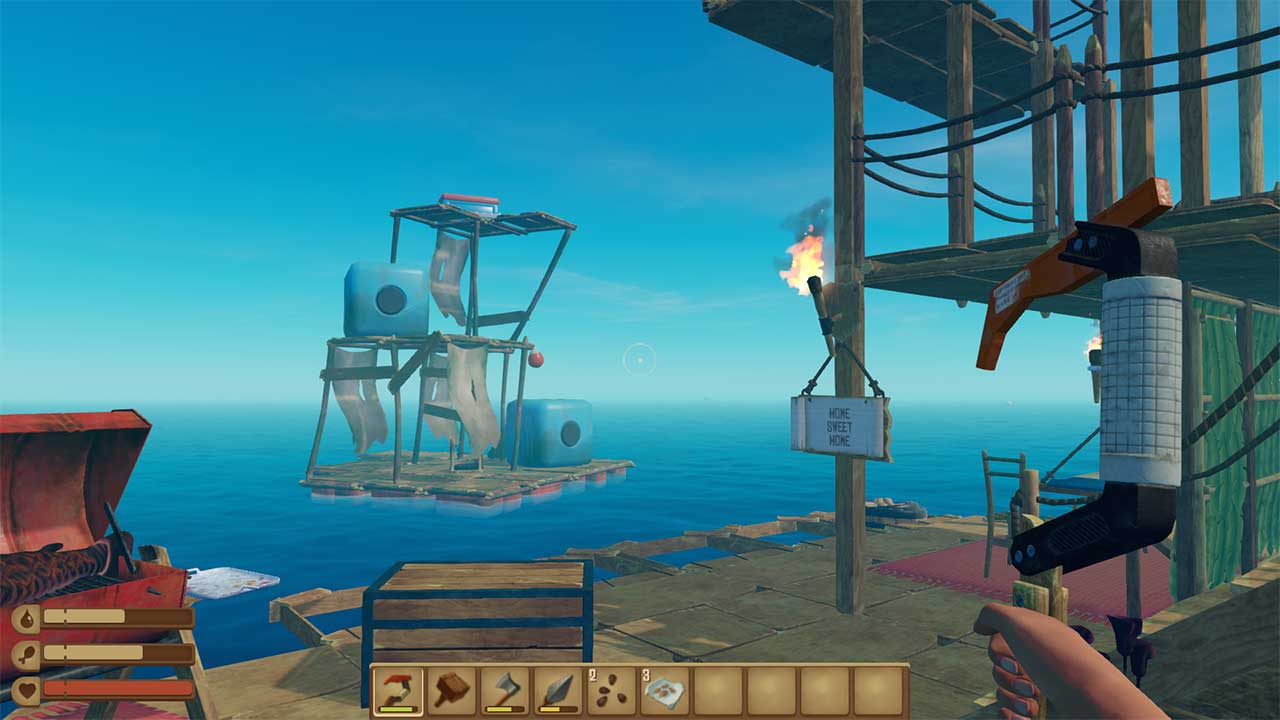 If players think they can get around the Screecher by simply diving beneath the surface, they're wrong. A poisonous pufferfish roams around both the large islands and nearby reefs, protecting valuable resources. As with the Screecher, players must combat the pufferfish and prevail to access resources beyond.

The game mode upgrade allows players to equip their rigs with armor and upgrade security so that, as they encounter other (sometimes volatile) players, they can focus more on protecting their home fronts than on pesky shark attacks. 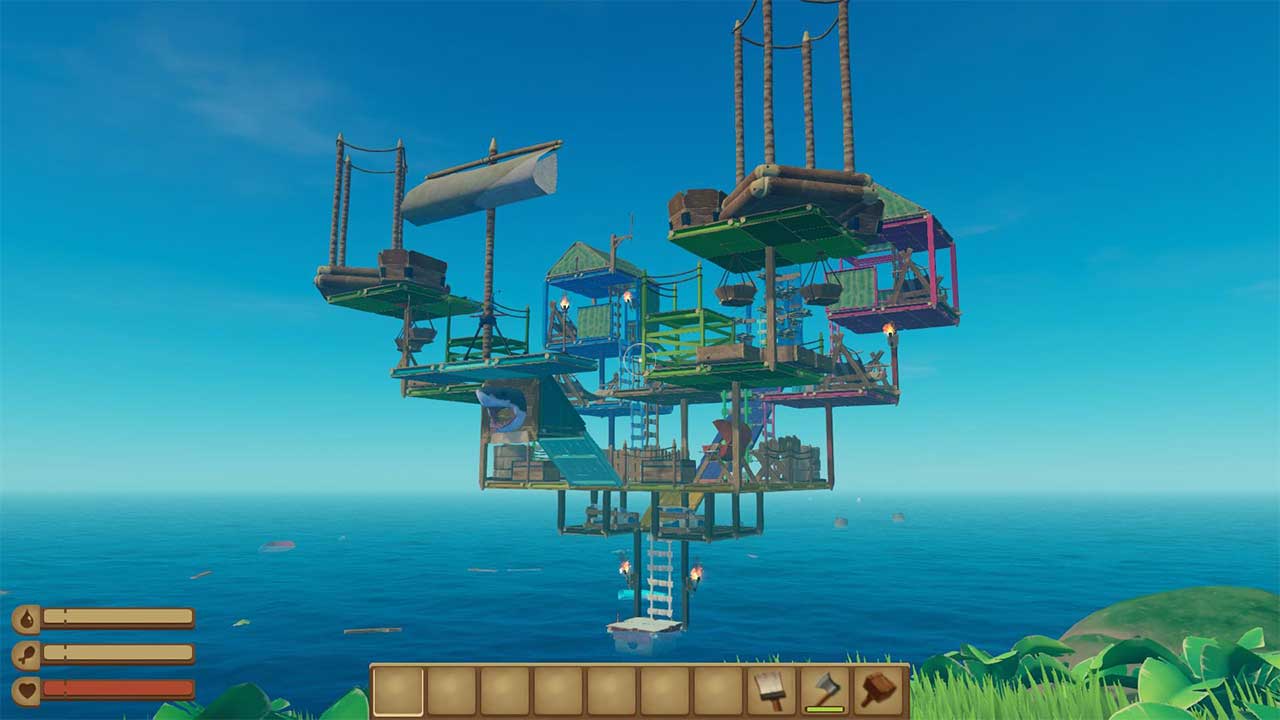 For some, watching an avatar float on a raft sounds about as fun as watching paint dry. However, for those gamers willing to stick it out beyond the initial survival mode, Raft can be a stimulating game that provides the opportunity to exercise their creative juices and have a bit of virtual excitement.